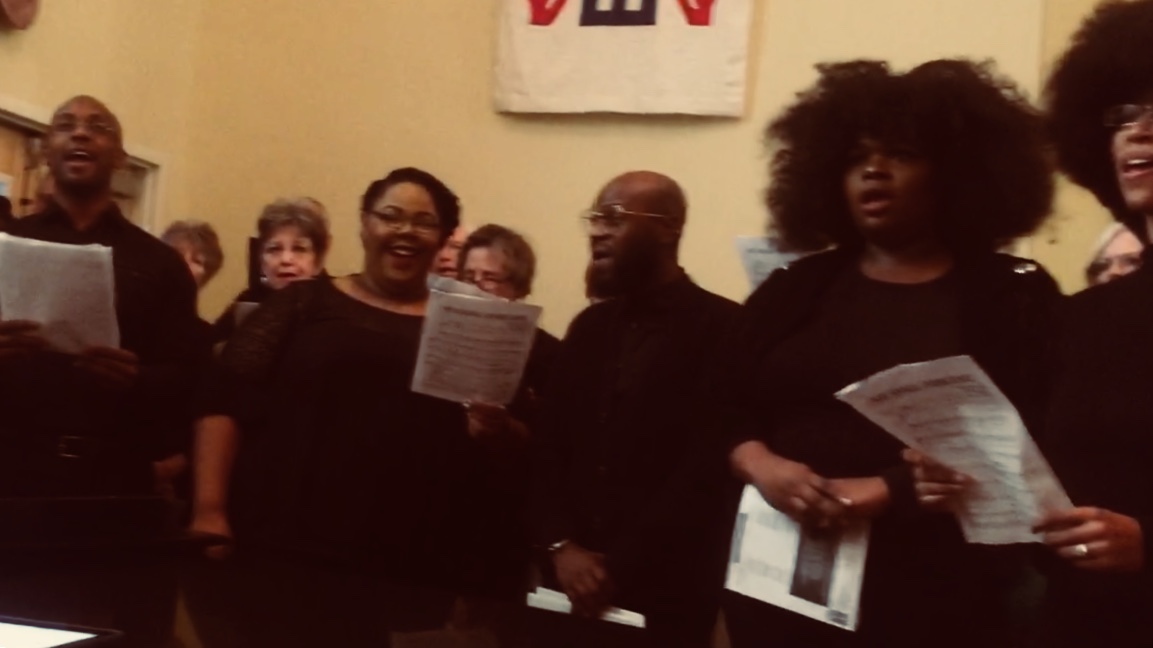 Session 5- We Shall Overcome

A few days prior to our last session, having earlier provided learning tracks to aid everyone’s practice, I called upon the participants who would be willing to arrive a little early to share some reflections and thoughts with me that we could record for a promotional video. (Yes, a cute 5 minute promo through the graces of smartphone technology and our tech savvy secretary is coming soon…) When I was interviewing one woman, she shared with me that while she was passionately concerned with the impacts of racism that continues to plague our society, which brought her through the doors to this group–she hadn’t expected to actually be singing. Yes, she saw the word “barbershop” on the flyer, but it hadn’t occurred to her that she would have anything to do with it. And had she known, she probably wouldn’t have come.

I confess to you as I did to her that this wasn’t much of a surprise. While nothing on the flyer was left out pertaining to the essence and purpose of the experience, I’m wise enough to the boundaries of our comfort zones to know that “COME SING ABOUT RACISM” wasn’t going to be all that attractive a headline. But what struck me in her telling me this, more than her expressed appreciation for the tangibility of the barbershop style as an effective metaphor that lent her new insight, was what she said on the side afterward. “I have been listening to your voice all week with the learning track. My kids heard it and were like… what on earth are you listening to?” Here was a person who was so committed to showing up as prepared as she could to our next rehearsal and performance, despite her discomfort with singing, that she practiced every day. In front of her teenage kids. (I mean, really- what’s more vulnerable than that??) It was just the demonstration of practice and patience with something hard and uncomfortable that would better the world, were we all be so dedicated to this level of individual responsibility in educating and preparing ourselves for the discourse and confrontation over issues that have cost and threatened our peace as long as we’ve been a nation.

And she was not alone. In our rehearsal, while it was certainly necessary, this time you could hear the song. The harmony was more balanced, the words were clearer, and things made sense. The group was still a little timid-sounding in some parts. It wasn’t yet “beautiful,” but it was coherent– which, much like our collective experience with solving and discussing issues of racism in America, is certainly better than where it started. In our subsequent discussion, we prompted the group for their own reflections compared to last week.

“So much better! I was so, so grateful for whoever put those tracks together. I knew what I was doing, so I could smile now.”

“I’m still a little lost, but it’s familiar. I have what I need to sing along. ‘Singing out’ ain’t gonna happen, but I’m singing. And we’re all here.” Shared by another woman who admitted to being initially mortified at the thought of singing for a real audience.

Others affirmed this shared sentiment of relief from a lot of last week’s discomfort. As we then reflected on the parallels in our experiences showing up to conversations of similar complexity relating to racism, the group shared newfound insights.

“Singing your part alone is one thing- then suddenly you don’t know it so well when other parts are there. Before this class, I had been much more sure of my own rightness in my assumptions about… well, white people. And where they’re actually coming from in their misgivings about black Americans’ truth and history of struggle.” Shared by a young black woman my own age.

“That’s true- because however you practice on your own as a soloist, when you come together with other parts, you have to adjust. You have to change.” The understanding reply of an elderly white man.

Some of the frustration with the “talk about it” approach is that nothing gets accomplished. But the feelings and insights we shared in our reflections together rather proved a dimension of value in mindful engagement and discourse which can lead us to the courses of action we need to take in order to truly influence cultural transformation. And in this abbreviated pilot program series– wherein the only complaint expressed was that it was too short– we had scratched the surface of this seemingly impenetrable crust suffocating our country, beneath which may indeed lie some substantial hope for transcendence.

At last came the four minutes in which the whole of this experience and all of our work would culminate. HALO and Hennessy, the brother quartet we’d asked Santa for last year, stood in the front row of a chorus of roughly 25 folks began David Wright’s arrangement of “We Shall Overcome.” And what was merely coherent in our rehearsal, perhaps augmented with fresh inspiration from our talk, transformed into a truly awe-striking and uplifting experience. Honestly, it wasn’t what we had expected- it was actually what we had envisioned. The voices that rose behind us, singing and sharing what felt like a renewed message of hope through what we may have dismissed as a tired old hymn filled me, personally, with such radiant joy that words can’t capture. Breaking an unspoken rule in this particular congregation that clapping for music or spoken word isn’t appropriate during service (a very different experience from my own Baptist upbringing), the church applauded. I hoped this meant they felt at least a slice of the joy we felt, finally standing and singing together.

I had needed to then both sing with the church choir and rush down to find the rest of HALO to jump on a Skype coaching (with Sandi and David Wright, as a matter of fact), so we hadn’t had time to interact with any of the congregation members at the close of service. But as we walked down 2nd street just outside the church, we passed a few members who expressed their gratitude for our music.

“It was very powerful.”

“I was in tears. Just beautiful.”

I may be personally prone to aureate expressions and almost fantastic ambitions– but I’m not a fool. I believe that this condition of racism is a poisonous system embedded in America’s consciousness. I see how it allows perpetual suffering under a suffocating crust of mere tolerance for injustice, which may be worse than hatred. And my hope for our completely emerging from beneath that surface does not extend that far into the reaches of optimism. But what we shared in these five weeks and ultimately in little more than four minutes–while not yet fully actualized– was so infinitely beautiful that I cannot help but believe, deeply in my heart, that we can overcome. To share this message alongside friends and strangers, I was truly inspired to sing with a faith greater than my belief, that yes— We Shall Overcome.

2 comments for “Session 5- We Shall Overcome”